The Berlin Wall Freedom Expedition Photo Gallery
November 9, 2019 -- the 28th Anniversary of the Fall of the Berlin Wall.

Read the Expedition Journal for the story
Buy your own piece of the Berlin Wall!

On November 9, 1989, four adventurous Americans, Art, Mark, Paul and Terri, watched the live television coverage with excitement as East Germans rose up and crossed the Berlin Wall, which had split Germany in two for almost three decades.  The mighty Communist dictatorship crumbled without a shot and today millions of former Communist slaves are enjoying a new life of freedom.  Days later these adventurers boarded a Pan Am flight for Berlin and joined the celebration at the Wall as well as marched for freedom with hundreds of thousands of East Germans in the city of Leipzig.  The Communists imprisoned the bodies but not the spirits of their citizens, as their immediate embrace of freedom proved so well.

In the spirit of free enterprise, the team helped smash down the Berlin Wall, and returned to America with half a ton of Wall, where it quickly became a hot gift item as well as the ultimate collectors item in commemorating man's struggle for freedom.

Here are a few scenes from the adventure. 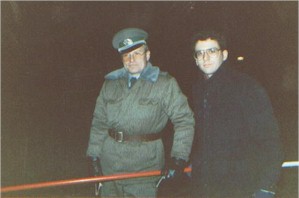 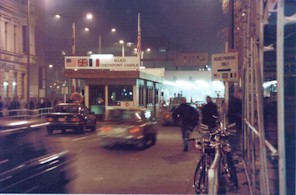 The famous "Checkpoint Charlie" crossing point to East Berlin.  You've seen it in the movies.  The U.S. side was just a shack but the Soviet side (see the blaze of lights) meant business. 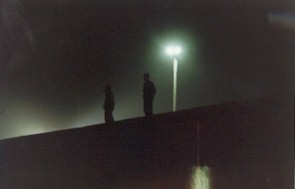 East German Guards on top of the Wall 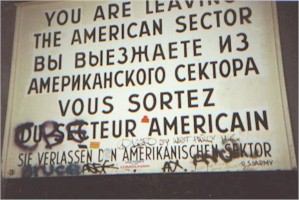 Sign at Checkpoint Charlie: You are leaving the American Sector.  We added the bumper sticker at the bottom: Victory Over Communism 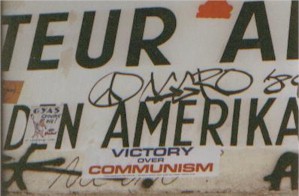 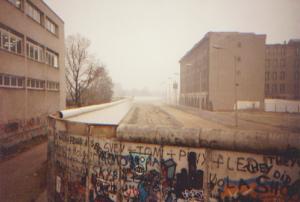 Bullets, land mines, dogs and troops imprisoned East Germans behind this strip of death but never crushed their hopes to someday become free 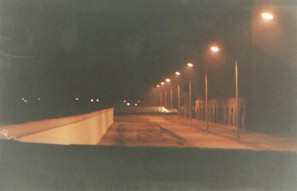 The death strip operated 24 hours a day.
Note the perfect white paint on the Soviet side of the Wall--to spot escapees against. 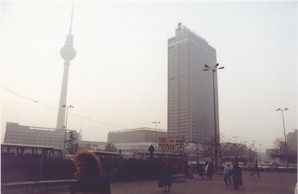 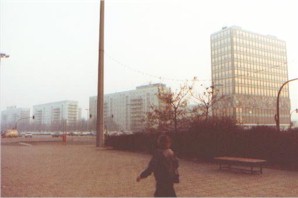 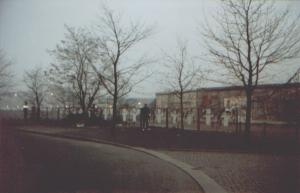 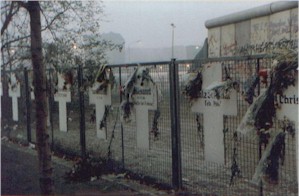 Close-up of the memorial, which is along the River Spree, near the Reichstag (Parliament) building. 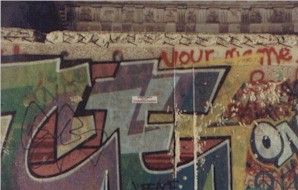 We put this bumper sticker on the Wall at the Brandenburg Gate to make it official! 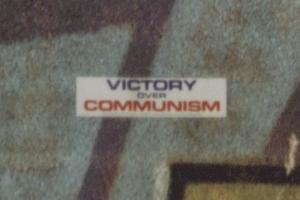 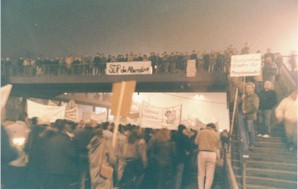 We joined hundreds of thousands of people in an incredible march demanding freedom in Leipzig. Government troops with water-cannon trucks watched from a distance but did not attempt to stop the march. 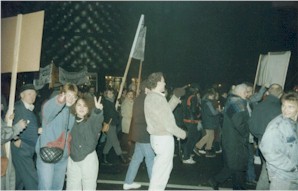 Marching for freedom in Leipzig East Germany
The march ended at the "Stazi" (secret police) headquarters.  Paul is in the center. 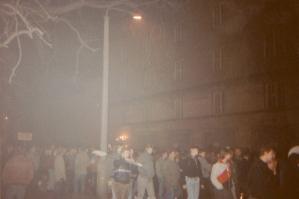 Very thick coal smoke ("London fog") during march. A local resident in the march said "Is smoky day" as if the smog was an everyday occurrence. 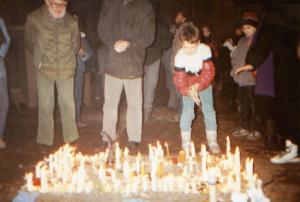 The emotion and the interest in the future was something you could feel in everyone. 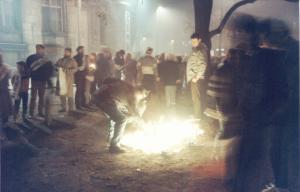 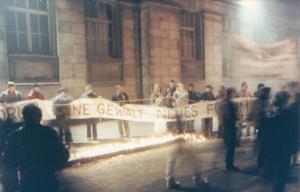 New Forum (a freedom movement) banner.
The messages demanding freedom and human rights seen at this rally could have cost everyone's lives just weeks before. 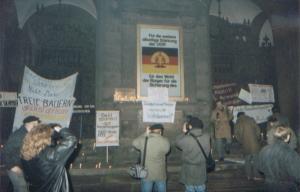 Messages of freedom in Leipzig.
A popular sight was East German flags with the Communist symbol in the center cut out, leaving a hole in the middle.

Were you in Berlin, East Germany, other Eastern European countries, or the Soviet Union in 1989-1991 at the time the Communist dictatorships fell?
Post your stories and observations during this exciting and historic period!

High-resolution images or photograph prints of these and additional photos of this historic occasion are available for purchase.

Buy a Piece of the Berlin Wall

The potent symbol of Communist tyranny became the site of celebration on November 9, 1989, as the wall opened for the first time since 1961. Freedom wins!  Now you can own a piece of true history, the Berlin Wall.

Tell a friend about this site!